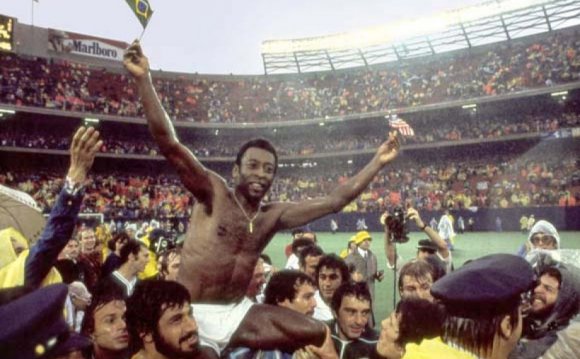 By David Hirshey
Special to ESPN.com

It's possible to leave your apartment and become an international idol by the time you get to the subway station.

I know, because I've done it.

It started in early May, when I was heading to work and a guy who had nursed a 30-year grudge against me for what he claimed was inappropriate behavior with his college girlfriend grabbed me in a half nelson on the street and bellowed, "Hirsh, I just saw you in a movie!"

"Yeah, you, larger than life. I wanted to ask for my money back, " he quipped.

"What movie?" I asked, still nonplussed as to what he was talking about.

"It had something to do with soccer. You always liked that crap." He was trying to be helpful.

And so it went. An all-but-forgotten interview I had done with a couple of British documentary filmmakers two years ago had reached the point that ... well, an Academy Award-nominated actor would later compliment me on my performance.

"Once in a Lifetime: The Extraordinary Story of the New York Cosmos" hits theaters in New York this Friday and will be released nationwide July 14. The documentary film is presented by Miramax Films, GreeneStreet Films and ESPN Original Entertainment. It will air in October on ESPN.

I was standing in the lobby of a movie theater at New York's Tribeca Film Festival when Matt Dillon walked up to me and said sheepishly, "Nice job, man." Wow, Johnny Drama's real-life brother knew who I was! OK, so what if he was the narrator of the movie I was in, "Once In A Lifetime: The Extraordinary Story of the New York Cosmos." I didn't see him going up to any of the other featured players and kissing their asses.

Then again maybe Dillon just wanted to get up close to the Gisele Bundchen doppelganger who was whispering in my ear as I scribbled my name on her program. Or perhaps he had overheard her opening line to me  "I've heard so much about you, I always wanted to meet you." I'm just glad Dillon had moved on before the Brazilian bombshell uttered her next line: "My mother was Pelé's longtime assistant. I wasn't born when you were doing your book with him."

Following my lifelong policy of always being gracious to 19-year-old, thong-wearing daughters of old friends, I said, "I remember your mother, " as memories of 1977 began dancing in my head like a Pelé stepover. I realized my love of soccer was an easy pass to a life I would have never otherwise known.

To enter the high temple of disco, drag queens and drug-fueled sex known as Studio 54, you had to make your way past the club's bouncers, whose approving nod could not be bought. Of the hundreds who massed behind the fabled velvet ropes, perhaps a third were granted access, while the rest were left to choke on the exhaust fumes from the limousines that pulled up to deliver the next load of beautiful people. They were the anointed, the uber-celebrities who didn't need a last name.

Actually, I didn't even need a first name. All I had to say were four magic words: "I'm with the Cosmos."

The Cosmos. The name alone conjures up a galaxy of stars. Or, as some would have it, galacticos. Yet 30 years before Real Madrid and Chelsea bestrode the world with their collection of celestial talent, the Cosmos conquered the last outpost of soccer indifference, the United States, and changed the nature of sport forever. It was an extraordinary moment in time, when "I'm with the Cosmos" carried as much weight as "I'm with the Rolling Stones"  perhaps more, since even Mick Jagger wanted to be sprinkled with the stardust of New York's soccer demigods and its one Supreme Being.