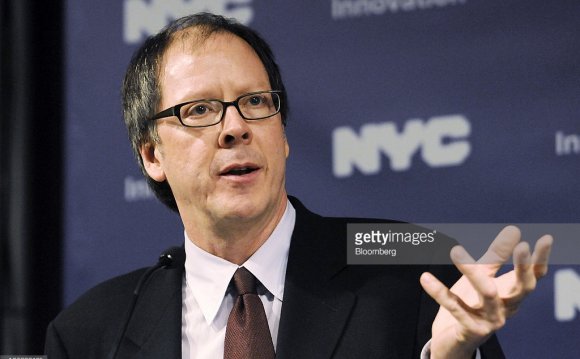 If you have seventeen and a half hours to spare in front of a screen - and who doesn't, really? - you should head to Greenpoint, where The Diamond is screening Ric Burns' epic 8-part PBS series 'New York: A Documentary Film'.

What may be the best film about New York history ever made (or just in this writer's opinion) will be shown every Wednesday through March 7th at this neighborhood bar.

Bartender Wiley Gaby, who has worked at the Diamond on and off since 2008, came up with the idea for the screening when he received the DVDs for Christmas a few years ago. He and friends would crowd in an East Village apartment order food, drink wine and watch a disc each week. "We had a blast, but we never quite got through 'til the end, " Gaby recalls.

The Diamond is Gaby's favorite bar, and thanks to their projector and "amazing" popcorn popper, watching all eight discs seemed like less daunting of a task at the venue.

Ric Burns' documentary details 400 years of local history starting with The Dutch arrival to New Amsterdam in the early 17th Century all the way through the new millenium.

Though last Wednesday marked the screening of the first disc, you can catch up online and join in for the second series on Jan. 14th at 7 p.m.

It may be cold, but drink specials should help take away the chill. Plus, unlimited free popcorn: "like, good popcorn, " Gaby says.

Ric Burns (brother of, yes, famous documentarian Ken Burns) is not scheduled to be in attendance, but he is confirmed to be there "in spirit" and hopefully inspiring conversations about the legacy and future of New York City.