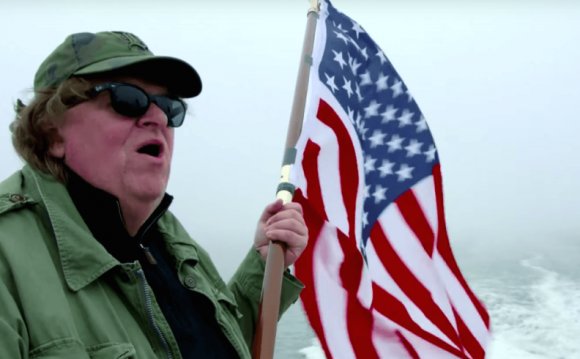 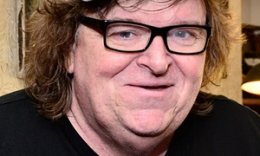 Michael Moore’s new film, Where to Invade Next, explores how the US government maintains a state of “infinite war”, according to the Oscar-winning documentary film-maker.

Moore revealed rough details of the project, which he has been making “in secret” since 2009, in his first Periscope broadcast. He answered questions from fans posted on Twitter and started by saying he’d like to “say ‘Hello!’ to my NSA friends that are watching right now”. He’s been a vocal critic of the agency’s mass surveillance practices – revealed by the Guardian in 2013 – and called whistleblower Edward Snowden “the hero of the year”.

He said Where to Invade Next, which was filmed across three continents, was “epic in nature”, but made quietly with a small crew. “There’s usually someone chasing us, ” he said. It seems the film, which premieres at the Toronto film festival in September, will cover some of the same ground as his Palme d’Or-winning Fahrenheit 9/11, a critique of the Bush administration’s “war on terror” detailing the various dictatorships that have been supported by the US administration in the interests of maintaining conflicts that profited America. Fahrenheit 9/11 is the highest-grossing documentary of all time, taking close to $120m (£75m) at the US box office.

“The issue of the United States at infinite war is something that has concerned me for quite some time, and provides the necessary satire for this film, ” said Moore in the Periscope broadcast.

“[There’s] this constant need it seems to always have an enemy – where’s the next enemy so we can keep this whole military industrial complex alive, and keep the companies that make a lot of money from this in business. I’ve always been a little bothered by that, so that’s where the comedy comes from.”

The blurb on the the Toronto festival website for Where to Invade Next suggests Moore will again use prank-based journalism to satirise US foreign policy. “Moore tells the Pentagon to ‘stand down’ – he will do the invading for America from now on, ” it says.

When asked by a Twitter user if he thought it was more important to make people laugh or deliver a message, Moore said “both”.

“People don’t want medicine, they want popcorn, ” he told a crowd of industry guests. “Entertainment is the big dirty word of documentary. ‘Oh no! I’ve entertained someone. I’ve cheapened my movie!’”