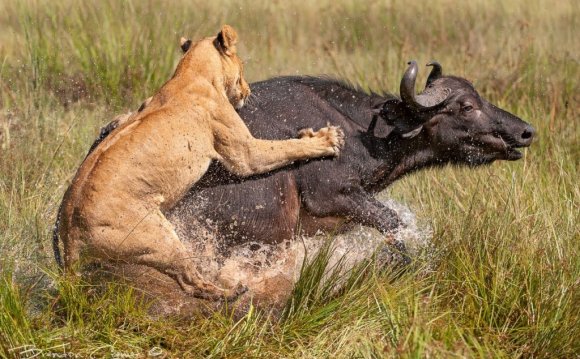 Tomorrow night, MSNBC airs a must-see documentary, “Blood Lions, ” that pulls the curtain back on the shockingly large, unregulated, and appalling South African captive lion hunting industry. Though much of the media following Cecil’s death focused on illegal hunts, “Blood Lions” makes clear that South Africa’s legal lion hunts are perhaps the most cruel and depraved of all. The documentary offers a rare glimpse into the captive, or canned, hunting industry, in which animals are bred in wretched conditions solely to be shot at in hunts with “guaranteed kills” in fenced areas where the animals have no opportunity to escape.

If the U.S. Fish and Wildlife Service lists African lions as endangered, the disgraceful import of these lion trophies by American hunters should stop, denying the industry a vital class of fee-paying patrons.

The documentary follows a South African safari operator and an American hunter as they expose this sordid industry. The so-called “hunters” who frequent these operations quickly dissolve the myth that this is a sport – they are there solely to gun down the animals and collect their trophies in a transaction where the kill is certain. One trophy hunter interviewed in the documentary says he prefers to kill captive lions because their dead bodies are not as scarred as those of wild lions.

At The Humane Society of the United States, we’ve been fighting the captive hunting industry for decades. We always hear the same excuse from the defenders of this mercenary trade – that captive hunting somehow aids conservation in the wild or supports local communities. “Blood Lions” ably shatters these self-serving myths, demonstrating that the industry hurts wild lion populations and does nothing for local communities – enriching the operators of these facilities and enabling American trophy hunters who have a mania for head-hunting, regardless of the circumstances of their alleged “hunts.”

One trophy hunter interviewed in the documentary says he prefers to kill captive lions because their dead bodies are not as scarred as those of wild lions.

We recently released a new report, “Trophy Madness, ” which provides a broad view into the bloodlust and vanity that fuels wealthy individuals to hopscotch around the world to kill endangered and penned-up animals. We found that one Michigan trophy hunter, the owner of a large mechanical contracting firm, has killed animals of more than 250 species in 26 countries. He once even sued his African hunting guide for not getting him enough trophies to add to his “significant” collection and for not getting adequate video footage of him killing animals.

We also found that a trophy-hunting couple from New York, who made their fortune in real estate, have killed nearly 600 majestic wild animals. They sued the U.S. government after it tried to stop them from importing the body of a rare sheep they had killed in Pakistan.

The Safari Club is now gearing up for its annual awards gala, to be held at the Mandalay Bay Resort and Casino in Las Vegas next February, with a thousand exhibitors offering guided trophy hunting excursions to kill a dizzying array of the most beautiful and often imperiled animals in the world.