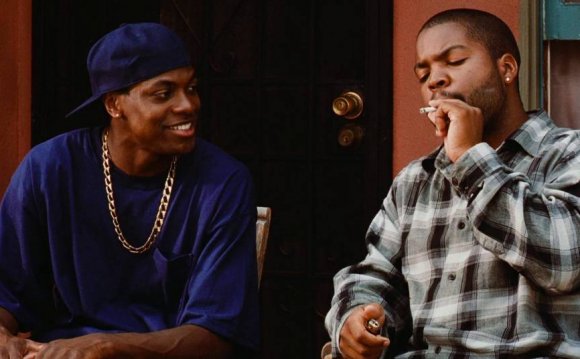 For all the talk about whether or not documentaries are crossing over to the mainstream, there has been very little attention given to that most conventional Hollywood tool for getting butts in seats: the movie trailer. I hadn’t given the subject much thought until I saw the trailer for 12 O’Clock Boys, the documentary about renegade bikers in Baltimore who pop wheelies and generally cause havoc while having a hell of a time. It premieres at theaters this Friday.

The trailer is beautiful and heart-stopping. Slow-motion images of guys on bikes appear while elegiac music plays in the background. There are striking vérité shots of altercations with police. It looks like a Bernardo Bertolucci remake of Boyz in the Hood.

And then critics’ quotes are shown: “The Wire with wheelies, ” and, my favorite, “This is what immortality looks like, ” that would make a jaded Williamsburg bartender cry.
Indeed, the film is as gripping as the trailer, but that’s not really the point here. It’s probably the best trailer I’ve ever seen for a documentary.

Kevin Tran, an in-house editor at Oscilloscope, which is distributing the film, cut it. “It packs a punch, ” 12 O’Clock Boys director Lotfy Nathan tells me. “It has done great things for the film already.”

Nathan says he had a lot of input in the trailer, which was loosely based on one that he had made before scoring the distributor.

Consider if there are any great – good, even – trailers, that have had an impact on you. I couldn’t. I looked back at some old ones for some of the more significant documentaries, and found many to be laughably bad. The trailer for Crumb uses that Woody Allen font, which is smart, but, overall, it plays like Cliff Notes of the film, rather than a concerted attempt to hook audiences. Which is not necessarily a bad thing, but I’m just saying. The trailer for Fog of War, one of my favorite documentaries of all time, just doesn’t show how closely we get to see inside the heart of the man who ran the Vietnam War.

And the trailer for Grey Gardens…

… without any dialogue, and heavy on close-ups of magazine articles about the subjects, is a total disaster. I know the ’70s were an eon ago, but there were plenty of great narrative feature trailers.

See this one for Alien, made at the time.

You’d think that the trailer for Madonna: Truth or Dare would be sexy and a shameless plug, but it also plays like you might as well be hearing someone snoring in the projector room.

More recent ones, even for popular documentaries like An Inconvenient Truth and March of the Penguins, also fall flat.

Perhaps documentary distributors haven’t had budgets to spend on cutting the trailers. And nonfiction types might just not be the kind of people inclined toward self-promotion, which extends through how they sell their films. And the fact that docs are rooted in doing good for society, rather than entertaining audiences, is another possible block. But I think that’s changing.

So, I asked around to see if whatever plagued documentaries in the past no longer is. Nathan pointed me to the trailer for Senna, which does indeed sell its subject, race car driver with a destiny for destruction, very well. It has a real pulse.

On Twitter, the trailer for Catfish was recommended to me, and although I have qualms about the movie for its cloak and dagger approach, I can’t fault the trailer for using the same seductive powers: it does what is asked of it, turning that nonfiction film about online identity and dating into a low-budget thriller, character study, and horror movie.

Other great trailers are the ones for The Square, The Summit, and one that’s not so recent – Spellbound. Jason Osder, the director of Let the Fire Burn, is a big fan of documentary trailers. He shows them before the start of the class he teaches at George Washington University. He particularly likes ones for Ai Wei Wei: Never Sorry, Armadillo, Planet of Snail and Cutie and the Boxer.

“I never wanted to do my own marketing. It’s not my skill and I am too close to the material, so I was grateful when Zeitgeist came onboard with their experience and took responsibility for it, ” he says, noting that his input, “was clearly appreciated and utilized.”

Osder thinks that most filmmakers can benefit from having creative people on their team, who work on the trailer, ones who “have more distance from the material.”

Whether his trailer helped get people to see his film is hard to say, according to Osder. “Who knows?” he says. “Or, could a different trailer have attracted more viewers? I tend to think not.”

Let’s see how the new wave of doc trailers increasingly catches up with the renaissance in documentaries that’s been happening the past ten years or so. They may be just another tool in the bag of tricks to market a film, but their increased sophistication is both necessary and inevitable.