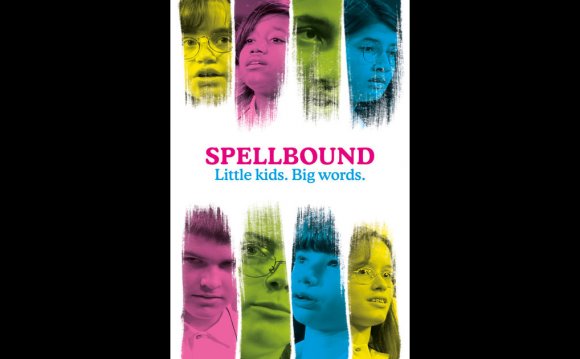 was like falling in love. You dont really analyse why you feel so strongly, so suddenly, but you do. Thats how I felt about making my documentary on the National [Spelling] Bee. I just knew in my bones that the Bee was the perfect backdrop for a great, big American story. The kind of story I wanted to tell. One full of drama and laughter and pathos and intelligence.

Interviewing Blitz one cant help like when watching this directorial debut but respond to his passion and empathy. Its rare that you go to the movies and everyone seems to be having a great time. Spellbound, possibly my best in show for 2004, is that movie.

Spellbound vividly tells the colourful tales of eight young contenders for the crown at the Bees 1999 final: an Olympian spelling smackdown in Washington D.C. Theres Angela, her Mexican father illegally immigrated to Texas years ago and still cant speak English. Ashley, an African-American for whom spelling represents a chance to escape Washingtons ghettos. Neil, whose Indian grandfather has paid 1000 people back home to pray around the clock for his victory. April, whose father works in a bar uncannily like Moes in The Simpsons. Ted, who lives in a trailer and has never left the rural mid-West. Harry, a hyperactive argument against the mass prescription of Ritalin. Emily, a patrician, pony club girl. Nupur, another feisty Indian. This American tradition goes back to 1925 and has nine million entrants each year.

Surprisingly, Blitz, who also did the camera work and produced, isnt a veteran of one of these blitzkriegs. I was a decent speller as a kid but it was not a favourite subject of mine. We never had spelling bees in the schools that I attended. I didnt see a bee until I happened onto the televised nationals on cable.

It was love at first sight. On one of those rare days when I was kicking back, not worrying about my first big project, I happened to catch the final few rounds of The National Bee airing on ESPN. This was in 1997. I had never seen a spelling bee, had never been in one, but I was rapt. I knew, in that instant, that this would make a phenomenal movie.

Multilayered and with a lot of subtext, Spellbound evokes The Simpsons, that enduring touchstone of American popular culture. Actually, hilariously, I mentioned to a Simpsons writer years ago that I was working on a spelling bee documentary and, lo and behold, within the year they aired an episode about a National Spelling Bee. Coincidence? Who knows?

Blitz, 35, a big Lord of the Rings geek, spent months studying and handicapping the spellers at past bees to decide on who to follow. I studied which kids had gone far in 1998 and were young enough to return... I imagined myself a real Vegas odds maker of the spelling bee... I needed great stories, stories that would resonate on their own and in the context of the event.

His favourite scene? Angelas regional spelling bee. Makes me want to tear up just thinking about her fathers pride on that day. Was he rooting for a particular kid at the final? We were just pleased that we would have several subjects go very far in the competition. No rooting beyond that. And the kids reaction to the final film? Wonderful, they all loved it.

Blitz is keenly keeping in contact with his subjects. Were going to include little updates on the kids on the DVD release. A few surprises that I wont spoil now but the most fun development is that one of the kids has gotten engaged. What will become of them? Hard to predict, of course, but theres a strange fact about spelling bees which is that a weirdly high proportion go on to become doctors. So its likely that several of these kids will do the same. Whatever field they go into, theyre all amazing kids in their own right and are likely to do well, I hope.


Some of the kids such as Harry deserve a film of their own. I think all the kids have a richness to their stories that would warrant more time. But I think theyve all had their fill of celebrity for the moment.

Does he think the offbeat, rather antiquated world of the spelling bee becomes a richly evocative microcosm of a diverse, colourful America and the unifying American dream today? I do, indeed.