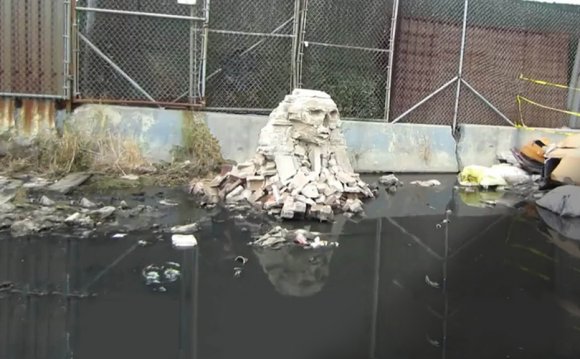 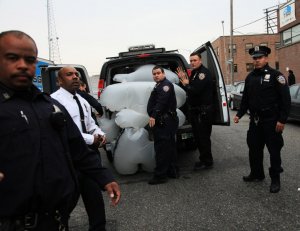 The Director and Producers Talk About Their New Street Art Documentary.

The Banksy show is about to begin again. For those who are not familiar with what that statement implies, you'll definitely be surprised.

Capturing Banksy. Police stuffing B-A-N-K-S-Y balloons in the back of a van on Day 31 of the street artists month-long residency on the streets of New York. (photo © Jaime Rojo)

"Banksy Does New York, " a new documentary by director Chris Moukarbel, meticulously culls and artfully arranges the play and the actors for you in just over an hour with new revelations popping up every few minutes - and you may not believe what you actually missed. But don't feel bad; everyone missed something during the one-month "Better Out Than In" residency of the Brisol-based street artist during October, 2013. Luckily Moukarbel has done the hard work of sifting through the thousands of Instagram posts, Tweets, YouTube videos, and Banksy's own digital clues to deftly tell you the story, or rather, stories. 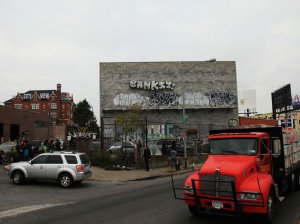 The latest HBO documentary, which airs November 17th, confronts the conventions of typical documentary making by compiling user-generated digital content, or crowd-sourcing the thousands of individual perspectives that occurred in tandem as the new works were unveiled on the streets of New York's five boroughs. (Full disclosure: We are both interviewed in it.)

"There's no way we could have gotten cameras everywhere even if we were trying and if we wanted to, " said Moukarbel at a special screening in Manhattan at HBO's offices last week for many of the "content creators" whose work is woven together to reveal the larger narratives arising from the events.

"No one really knew what Banksy was doing. 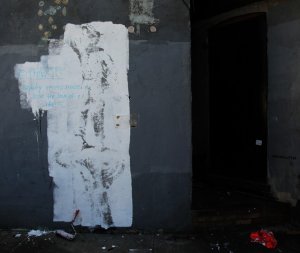 No one had put a frame around it, " says Chris as he describes the process of allowing the stories to tell him and producer Jack Turner what actually happened. "I mean he so expertly used social media, " says Turner, "Having an Instagram account from the first day - he invented a way for communicating his work and created a following for it and created an event that is a work itself."

Aside from the mechanics of the unfolding dramas, "Banksy Does New York" attempts to give many of the actors center stage here where other film makers would have relegated them to the roles of extras. Out of town vloggers drive into the city to record their daily discoveries, bonafide Banksy hunters who pool their clues in real time virtually and race to discover the new piece before it is stolen or vandalized, neighborhood entrepreneurs who charge a fee to onlookers for peeking at the paintings, and even the human stories behind the public heist and subsequent art sale that is arranged for one of the sculptures.

Somehow the elusive street artist pulling strings behind the scenes comes off as a sardonic populist everyman although he probably really is just a flagrant [insert your personal projection here]. By removing himself from the show, everyone else is revealed. 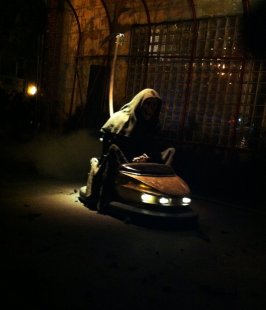 And they are nearly all here too. Like the fictional nightlife doyen Stefon Zolesky on Saturday Night Live might say, "This club has everything"; artists, fans, intellectuals, court jesters, minstrels, charlatans, sideshows, soldiers, police, politicians, a priest, dogs, passion, sweetness, sarcasm, irony, jealousy, chicanery, a Greek chorus, car chases, a few fights, a couple of heartfelt speeches, some arrests, bleating lambs being lead to slaughter.

Like we said last year as the month drew to a close in an article entitled Banksy's Final Trick, "No longer asking, 'Who is Banksy, ' many strolling New Yorkers this October were only half-kidding when they would point to nearly any scene or object on the street and ask each other, 'Is that a Banksy?'"

We turned the interview tables on director Chris Moukarbel and producer Jack Turner to see how they developed their story for "Banksy Does New York". 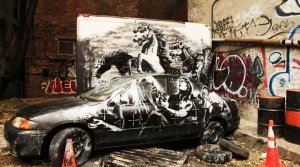 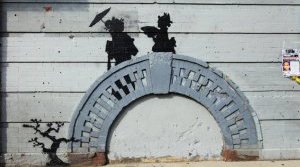 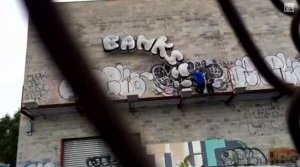 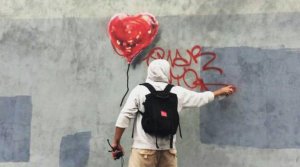 "Banksy Does New York" Documentary to Premier on HBO