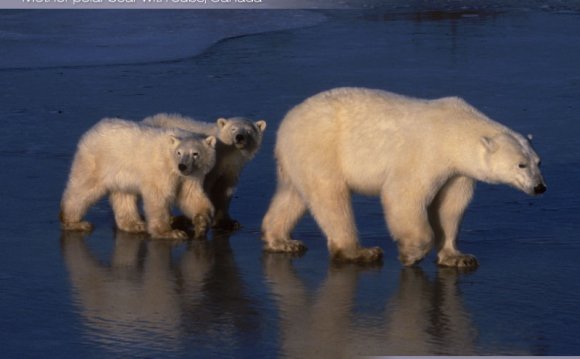 With a production budget of $25 million, the makers of The Blue Planet: Seas of Life crafted this epic story of life on Earth. Five years in production, with over 2, 000 days in the field, using 40 cameramen filming across 200 locations, and shot entirely in high definition, Planet Earth is an unparalleled portrait of the third rock from the sun. This stunning television experience captures rare action in impossible locations and presents intimate moments with our planet's best-loved, wildest, and most elusive creatures.

1. From Pole to Pole. The first episode illustrates a 'journey' around the globe and reveals the effect of gradual climatic change and seasonal transitions en route. During Antarctica's winter, emperor penguins endure four months of darkness, with no food, in temperatures of ?70 °C (?94 °F). Meanwhile, as spring arrives in the Arctic, polar bear cubs take their first steps into a world of rapidly thawing ice.

2.Mountains - This episode gives you a tour of some the many vast mountain ranges in the world, including the Andes and the Himalayas. It also shows the different animal species living in these mountainous environments, as well as footage of some of them doing things that have never been seen before.

3. Fresh Water - Although only three percent of the Earth is fresh water, there is no lack of animals living in those particular habitats. Fresh water has shaped the Earth while carving gorges, valleys, and great waterfalls, and in this episode, we witness the unique presence of distinct animals such as crocodiles and otters.

4. Caves - This episode introduces you to one of the most mysterious habitats in the world, where not many have ever been: caves. Also the only habitat not directly driven by sunlight, this episode shows you the many different, incredible creatures inhabiting them, including the various species of bats. Also introducing you to the different types of caves, from underground caves, to underwater caves, this episode brings Planet Earth to a fascinating end.

5. Deserts - This episode features the unique desert life on the planet, including animals that have to withstand lack of water. It also shows what these hardened creatures do in order to survive in such a barren environment.

6. Ice Worlds - Zooming in on the frozen wastelands of the arctic and antarctic, Planet Earth takes a look at the various animals that live there, including polar bears and different types of penguins. It also shows you that like desert creatures, these animals have certain skills that are necessary for survival in such harsh climates. Except this time, it's for survival in some of the coldest areas in the world.

7. Great Plains - This is an episode that introduces you to one of the largest land habitats on the planet which cover over a quarter of it, as well as animals that are some of world's largest. It also includes massive migrations and huge hunts made by some of the fierce predators that roam there.

8. Jungles - With incredible angles from high-definition cameras, this episode shows us the habitat which may only cover three percent of the planet's surface, but is home to more than half the species in the world, from how chimpanzees live, to the many different types of rare birds.

9. Shallow Seas - This episode follows certain creatures such as humpback whales in their journey for food in the shallow seas of the planet. It also takes a look at the teams of other aquatic life that live in these calm waters where sunlight reaches the seabed, including beautiful coral reefs.

10. Seasonal Forests - This episode takes you to the world of seasonal forests, where it shows you all sorts of different plant and animal species living there, from the enormous sequoia tree, to the nearly extinct Amur leopard. It also shows you that although the seasonal forests of the world may seem familiar to us, there are still many areas of it that are mostly unexplored.

11. Ocean Deep - There is much of the ocean that has never before been researched or explored, and this episode shows you some of that unexplored terrain, as well as some of the various aquatic life that live there.