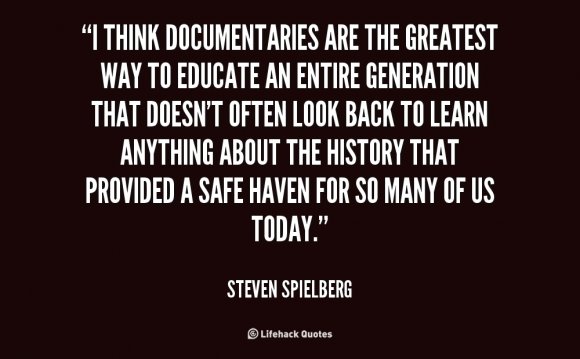 In the Game makes an important contribution to girls' sports documentary with its balanced approach to representing a team and life.

"When you start a documentary like this, you don't know until the very end whether or not you have a story."

A look back on using The New York Times Op-Doc series as the focus for a course in online documentary production.

Some key resources, both online and in print, that helped develop materials for The New York Times Op-Docs curriculum.

Following a semester of teaching online documentary production through the Op-Docs series, this post offers a round-up of the assignments used in the course.

Elizabeth Lo's short film (and New York Times Op-Doc) Hotel 22 became the focus for a session about sound in documentary.

Not all documentary characters are represented as heroes, and nor should they be.

The Notions+ The Notions+ “Our Curious Culture of Consumption” is an iPad app that brings together a series of materials about the ideas of consuming and being consumed. Co-publishers Heather McKenzie and Elaine Symanski curate photographs, illustrations, videos, a song, a poem, and mostly essays. Some contributions are reflective, some humorous, and some prescriptive. “Our […]

As a viewer, I pay too much attention to B-roll. One reason is that B-roll is often intercut with interviews, and it changes the dynamics of movement within the frame.

"Where do you get ideas for documentaries?" is the number one question I have received through comments and conversations over the years. Here are some starting points to consider.

A handful of the shorts appearing in the Op-Docs series focuses specifically on women and their stories, and this post offers a round-up of some of those stories.

Kartemquin Films has a strong Chicago connection, and many of its documentaries are about the city and its people in some way.

For a junior-level course this semester, I am using The New York Times's Op-Doc series as a model for talking about journalism, documentary, and online video.

In teaching a junior-level news and reporting course this semester, I have decided to use The New York Times's Op-Docs as a production model for thinking about news within online journalism.

Gaddafi The Truth About Libya- Documentary