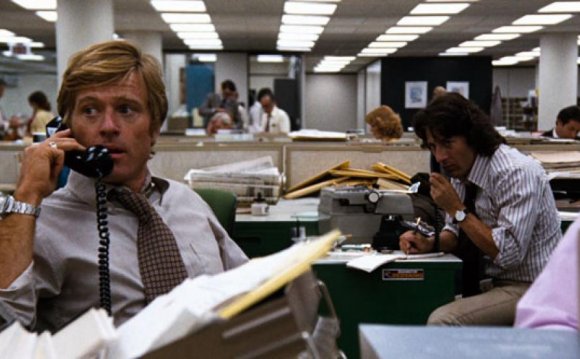 Michael Tomasky makes a definitive list of the best political movies of all time. And if you disagree with him, you’re wrong.

A note on methodology. First, I make no claim that I’ve seen every political movie under the sun, so there are surely many great ones that I’ve missed. Second, since we’re pegged to the Oscars, no foreign films for now, so no Battle of Algiers or The Conformist or the more recent Waltzing With Bashir, all of which would obviously be on any list that was international in scope. Ditto, for me, Persepolis.

Although: Is Persepolis a political film? It is and it isn’t; it’s partly a coming-of-age story, which brings me to stipulation three, which is that I’m limiting this to films that are at their core about politics and the political process, and not half political-historical saga, half love story (Reds, say, which I thought was great at the time and pretty much so again about 10 or 12 years ago when re-watched most of it). Some of my movies are about Washington, some are about the swirling political winds of their day, but they’re all in my admittedly subjective view chiefly about the real politics of our nation and world. Hence no Election, which was great but doesn’t meet either of my criteria. And Casablanca is political, but it’s out because it just transcends category.

Fourth, my list tends toward older fare, only because I know it better. My movie-going record in more recent years has been spotty. I never saw Wag the Dog, for example. I just somehow missed it at the time, and it later seemed to me very of-the-moment and not worth revisiting X years later, although maybe I’m wrong about that. I did see In the Loop, which I imagine a number of you would put on your lists; I liked but didn’t love it. And 4B, I’m leaving out stuff that I know is great but that I haven’t seen in half a lifetime, like The Candidate and , because I can hardly remember anything about them.

Fifth and last, note that I said this is a list of favorites, not “the best.” I’m well aware that some of my choices wouldn’t make a collective critics’ list. But I don’t care about that. I’m the columnist here, and my take is my take! I include for your delectation a few oldies that are quite obscure today but were great in their time, and I hope what I have to say about them here leads some of you to go stream them.

All that said, let us dive in. I’m doing this by genre, which I think is more interesting than just a top 10 list. And I’m not giving plot summaries, by the way, but the links are all to Wikipedia, for the curious among you.

We start with Best Cold War Movie because this one is my #1 favorite political film of all time. (John Frankenheimer, 1962) might well make my list of top 10 movies of any kind ever. It’s just great movie-making. There’s not an unnecessary minute in this movie. Every scene, every shot, is near-perfect. And the way the plot unfolds is mesmerizing: You have to pay attention and think, but it’s never confusing or obtuse. Frankenheimer doesn’t hand you everything on a platter; he meets the viewer halfway, the way a great novelist does the reader.

Laurence Harvey, with that weirdly enigmatic face of his, simultaneously boyish and sinister, is so perfectly cast and plays it so well. Angela Lansbury! What a performance. Every scene between the two of them is so intense they can be almost hard to watch; like cutting your skin with broken glass. And the breathtaking dream scene, Frank Sinatra’s dream, in which one circular-panning camera sweeps the room as it goes back and forth between the old bitties’ garden club meeting that they’ve been brainwashed into thinking they’re attending and the North Korean indoctrination session that they’re actually attending, is just mind-blowing; the greatest single scene in any movie ever.

It’s interesting that all the principals are Republicans. The buffoonish reactionary Senator Johnny Iselin, sure. But surprisingly by today’s lights, the heroic, liberal-minded Senator Thomas Jordan, too. This wouldn’t have seemed odd at all in 1962. The Republican Party had people like that in those days.