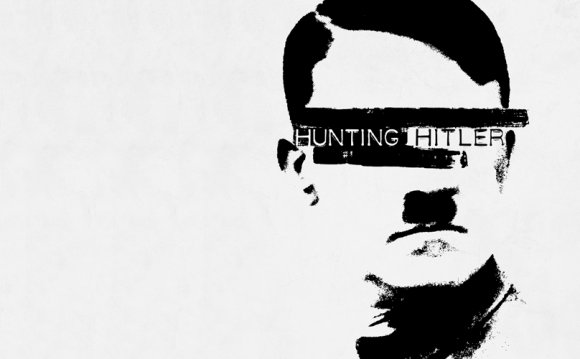 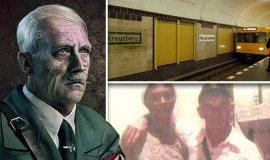 How Hitler may have looked in his Argentina bolthole

A major eight-part documentary series draws on newly declassified FBI files and makes startling discoveries which suggest Hitler may not have died in his bunker at the end of the Second World War after all. Instead, the programme ventures, he could actually have been spirited out of Berlin under the noses of the invading Soviets.

Then, having travelled on a U-boat from Spain, he may have spent the rest of his life plotting the rise of the Fourth Reich at a secret compound in the Argentine jungle.

On an exclusive tour last week of the tunnel network Hitler had built under Berlin, the Express found out more about the astounding claims.

And in the process of filming Hunting Hitler, which starts on the History channel on Monday, November 2, the producers have made a discovery that may change the way in which Hitler’s demise is viewed by historians.

They have found a false wall in a Berlin subway station which could have facilitated the Führer’s escape 70 years ago.

The programmemakers describe the discovery of the wall as their “eureka moment”.

Last year, the FBI declassified 700 confidential documents. These indicate that perhaps the greatestwar criminal in history may not have committed suicide in the “Führerbunker” but instead fled to South America as Nazi Germany collapsed. 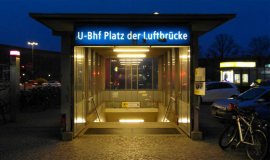 A secret memo from FBI director J Edgar Hoover declared that: “American Army officials in Germany have not located Hitler’s body, nor is there any reliable source that will say definitely that Hitler is dead.”

The modern entrance to Luftbrücke station, under which the secret tunnel has been found

The false wall was found at Luftbrücke U-Bahn station

In the aftermath of the war, many experts wondered if the Führer had faked his death and the US Army even mounted a clandestine operation to search for him in Spain.

Armed with cutting-edge technology and these newly released FBI files, Hunting Hitler’s team of renowned investigators approached this like a cold case.

In Berlin last week, the Express met the investigators, including Bob Baer, an ex-CIA veteran, the model for George Clooney’s character in the 2005 film Syriana and one of America’s most elite intelligence officers; Tim Kennedy, a top US special forces operative who was part of the unit tracking Osama Bin Laden after 9/11, and Sascha Keil, a German historian from the Berlin Underworlds Association. 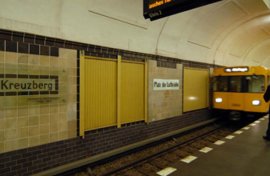 The producers have found out that there was a mass Nazi exodus from Tempelhof Airport on April 21, 1945, the day after the last recorded public sighting of Hitler.

On that date, eight planes were apparently loaded with the Führer’s personal effects.

The expert team on Hunting Hitler initially worked out that the Nazi leader could have made it from his bunker to the airport almost entirely underground, except for the final 200 yards.

Rumours have long circulated of a hitherto unknown tunnel connecting this final 200 yards from a nearby subway station (once known as U6 and now called Luftbrücke) to the airport. And now, using a state-of-the-art sonar device regularly employed by the US military in their manhunts, the team investigating the mystery of Hitler’s possible evasion have unearthed that tunnel.

This provides the “missing link” from what was the U6 subway station to Tempelhof and could have allowed the Führer to escape without being captured above ground by the marauding Soviets. 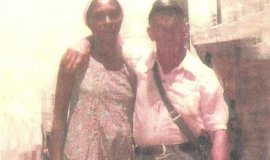 If I were an SS officer assigned to get Hitler out of Berlin, I’d take him to Misiones. It fits

Tapping the false wall in the subway station to prove its hollowness, Jason Wolf, the show-runner on Hunting Hitler, recollects the moment they made this massive breakthrough in their investigation.

He says: “It was a eureka moment. We were looking for the tunnel when Sascha suddenly went rogue down the subway. He knocked on the wall and it sounded hollow. We brought out the sonar and confirmed it was a false wall.

“We looked at each other and went, ‘Holy cow!’”

The other major revelation in Hunting Hitler concerns a jungle compound in the Misiones province of northern Argentina.

As they explored its ruins, the team uncovered all manner of Nazi artefacts. Baer, who during his long and distinguished CIA career tracked Saddam Hussein among many others, reflects that the discoveries in Misiones were one of the key factors in making him think that they may not be on such a wild goose chase after all.

“I used to track people in that region and it’s an area of great mystery, ” he says. “There’s something terribly wrong about it. If I were an SS officer assigned to get Hitler out of Berlin, I’d take him to Misiones. It fits.”

The premise that Hitler managed to flee Berlin at the end of the war - and one claim in particular that he saw out his days in a remote part of Brazil - has been widely reported before and even Baer admits that he was initially “completely sceptical” about this investigation.

However the series does make a compelling case that the escape could have happened.

Now Baer says that, “I couldn’t resist this story and the opportunity to use my knowledge about people escaping to look at the possibility that Hitler escaped from Berlin on April 21, 1945 and made it to South America. “Was that possible? Yes.”

And with the discovery of the false wall in the Berlin subway, the producers may have helped alter the way experts now regard the German dictator’s death.

Keil concludes: “What was my feeling when we discovered the false wall? I thought, ‘This is the missing link!’ I’m not new to this business. Over the past 20 years, I’ve had a few of what I call personal Moon landings.