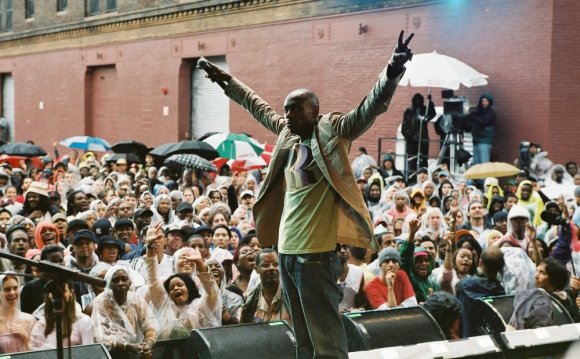 Hip-hop's rich, colorfully complex history makes it a supreme subject for a documentary. It has an arc, an unstoppable momentum that humbly sprouts from the streets of the Bronx, birthed from a hunger for a true sense of originality. It has its forefathers (Grand Wizard Theodore, Grandmaster Flash, and Melle Mel) and its ground breakers (Afrika Bambaataa, Doug E. Fresh, and N.W.A.). And yes, it has strife in spades, but it also has something pop music will never truly comprehend—community.

Any good hip-hop documentary addresses each of these integral elements with personal panache all its own, which is why, in our opinion, there can never be too many of them. Ice-T's new doc, Something from Nothing: The Art of Rap, which debuted last Friday, is the latest welcome addition, a film that revisits the golden age of the genre with its greats (Chuck D, Doug E. Fresh, Big Daddy Kane, Kool Moe Dee, and Grandmaster Caz) and uses conversations with its newer successors (Kanye West, Eminem, and Nas) to scratch at an important question: How does America view rap music? Is it getting the respect it deserves?

It's a quandary worth giving thought to, but before you set off trying to define what rap means to an entire nation, you should probably know why it means what it does to you. You should have your graffiti facts and your breaking history straight, and have a full spectrum view of what makes hip-hop music what it is and how it got there. Allow rap to reintroduce itself with our list of The 25 Best Hip-Hop Documentaries.

The History of Hip Hop - A Documentary by Michael Ezeobi