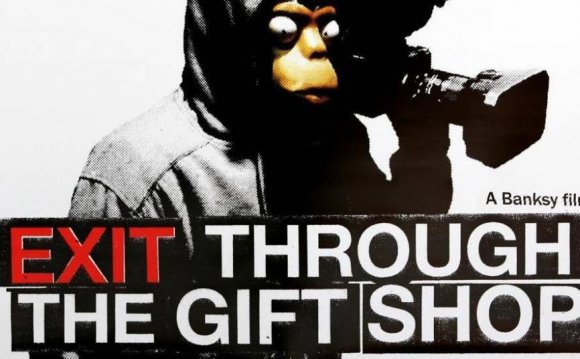 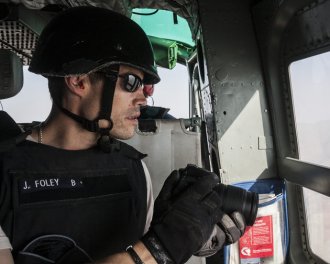 You say at the top of the film that you won't show the beheading, but there are tough images nonetheless. Did it seem obvious to you how gruesome you’d let the footage become?

It was never obvious. It was a constant discussion and evolution of what I wanted to show and what was important to show as we developed the narrative. At first, I didn’t want to show anything from the video of Jim in the orange jumpsuit. The war footage I definitely wanted to show because that’s what he was doing.

The great thing is, one of my writers and the editor didn’t know Jim, so it was like this perspective that kept me in line with what’s good for the narrative, as opposed to what I want to show because he’s my friend. You want to say, “Oh, it’s that guy, the journalist who was beheaded in Syria.” But you have to show that image because that’s how everybody knows who James Foley was. The idea of not showing the image quickly went out the door. And then, as we developed the story and it became what it was, when we ultimately get to that moment of Jim’s death, that was a really difficult sequence to edit. What are we going to show? Is it necessary? This is a piece of propaganda video. This is a recruitment video for ISIS, so you run a really difficult line between exploitation versus narrative, and I think ultimately what I ended up realizing was the whole idea of this film was to recontextualize the video. Take it away from its intended purpose and twist it so Jim owns it, because once you understand who Jim was as a person, I believe, it’s no longer this symbol of propaganda. When you see Jim in that element, you see that total resolve and what he endured. Now I feel like that’s his moment. It’s not ISIS’s moment. That was the end of his life, but it means something much bigger now than just a politically fueled image.

Before making this movie, would you have called yourself a political person?

Has it made you more political?

I would say yeah, definitely. The film is purposefully apolitical for a number of reasons. There are so many political issues this film brings up, and I don’t really like films that just kind of kiss something. You can’t just say, “Oh, totalitarianism, ” and then just move on. There’s government hostage policy. Do we bomb ISIS? What do we do with the Syrian government and their regime? Do we pay a ransom? Our government launched a raid at one point to rescue the prisoners, which has since been declassified. It was unsuccessful - they were too late, and there’s a lot of backstory to this. The criticisms that we get for the film are that it’s not political enough, like, “Oh, it’s dishonest because it’s not talking about these things.” But that’s not dishonesty.

It’s the story you chose to tell. The movie could have been strictly about global politics.

You could make any kind of movie, but I’m not about to get into any of those topics because I don’t have the time to go over them, and then once I do, then you lose Jim. But, at the same time, what I like about the film, and what I learned - and this wasn’t intentional - was that Jim’s story was just this story of this one guy, but the political issues that percolate to the surface are huge, especially now. The Syrian refugee crisis is the biggest refugee crisis since World War II, and Jim was there telling stories about that, like European hostage policy versus American hostage policy. Then there’s humanity, and good versus evil, and all these things that come up. I feel that's more powerful than me saying, “This is what you should be thinking” or “This is what the government should be doing.” I’m not in a position to say that. Jim would hate that, too - he wouldn’t want me to be political like that. But go ahead and sit in a bar with your buddies for three hours and talk about it. I think the film brings those things to the surface, which is great.

There’s going to be conspiracy theorists wherever you go. I learned this lesson when I did a film on the national debt, called “I.O.U.S.A.” One of the guys in that film was a former U.S. comptroller, David Walker. The film came out, and people were saying it was this and people were saying it was that, and the director was all concerned. And David said, from a very political standpoint, “Listen, all you have to do is focus on the 70 percent.” I said, “What does that mean?” He said, “There’s 15 percent of people on the left and there’s 15 percent of people on the right that have very extreme views. Focus on the 70 percent in the middle because the 15 percent on the left and the 15 percent on the right, you’re never going to reach them. No matter what you do, you’re never going to change their minds or satisfy their desires." Whether it’s conspiracy theorists or people saying this is a fake video, it’s not worth my time. It’s all bullshit. I don’t know if you want to print that, but it’s true.

How much time did you spend with each of Jim’s family members?

I did two interviews with Diane, Jim’s mother, and I did one interview with everybody else. They lasted anywhere from two and a half to four hours. This was the first time I’ve ever done long-form interviewing. My approach was to spend the morning with them. We’d get breakfast and tea and chat. I already knew them, but I wanted to spend time with them.

No cameras. And then we’d have lunch, and then sit down and do the interview later in the day. Even when I met with [journalists Daniel and Pierre and Didier and Nicolas], I was comfortable. I brought Michael and Katy, Jim's two siblings, to France with me to do those interviews. Diane had put me in touch with them, so there's an immediate comfort factor. These were Jim’s friends. It was nice because they knew I wasn’t there for some agenda-driven angle. I was just Jim’s friend making a documentary. That really helped me out.