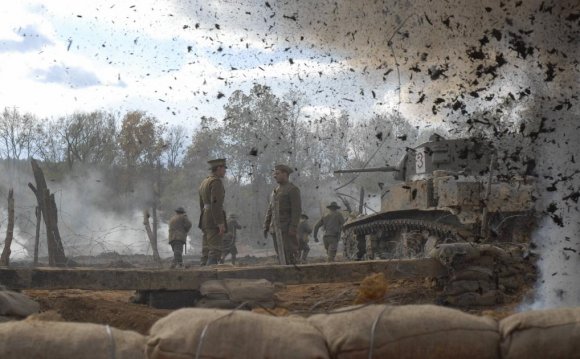 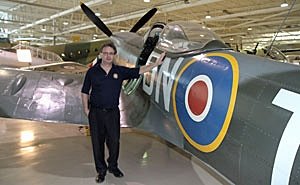 If you catch the History Channel’s new WWII documentary series Air Aces, watch closely – besides the Lancaster bomber and Spitfire fighter from Hamilton’s Canadian Warplane Heritage Museum, if you’ve got sharp eyes you might recognize some local scenery.

"We filmed the Lancaster last summer and we didn’t have to take it very far from the museum, because this area is actually a pretty amazing match for the British countryside, " says Nick Godwin, head of documentaries at Toronto’s Cineflix Productions, which made Air Aces for History Television Canada and The Military Channel.

'Hamilton has the most experienced Lancaster pilots in the world now, because we’re pretty much the only place still flying one.' —Al Mickeloff, Canadian Warplane Heritage Museum

[in Brantford] that looked a lot like a World War II-style airstrip."

The scenes of the aircraft over water were done above Lake Ontario near the city. And the interior footage of the Lancaster was filmed at the warplane museum.

"We also shot some of the scenes with the guys and the bunks and things at a studio in Hamilton, " Godwin said.

The Canadian Warplane Heritage Museum's Al Mickeloff with the Spitfire used in some of the ground scenes in Air Aces. (Ian Johnson/CBC) 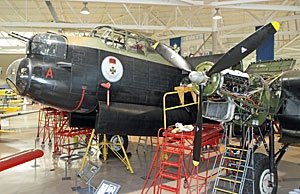 Air Aces is a six-part historical documentary series that made its debut on the History Channel earlier this week with the story of George Frederick "Buzz" Beurling.

Born in Verdun, Que., in 1921, Beurling became a pilot with the RAF’s 249 Squadron in Malta. He shot down 27 planes there before he was shot down and wounded himself, returning to the U.K. to recuperate. At the age of 21 he was the most decorated pilot in the history of the Royal Canadian Air Force, and Beurling scored at least 31 kills over the course of his wartime fighter-pilot career.

The Spitfire LF Mark XVIe on display at the museum in Hamilton was used in some of the scenes on the ground in the documentary. The flight sequences were done with a second Spitfire in England.

The second episode in the series, airing Monday Jan. 14 at 9 p.m., is the story of Douglas Bader. Despite having lost both legs in an air crash, Bader became a WWII ace and turned a ragtag group of Canadian pilots into an elite group of fliers.

The third episode on Jan. 21, Wing Walker, where Hamilton's Lancaster features prominently, is about the crew of bomber ME669 of the RAF’s 106 Squadron. Few Lancaster crews made it even to the half-way point of the 30 missions they were expected to fly during the war. ME669’s crew avoided disaster until its 30th mission.

"It’s really an amazing story, and the pilot was Canadian, Fred Mifflin, " Godwin says. "During the mission they’re attacked, the plane catches fire, and a man named Norman Jackson does something absolutely insane — he climbs out onto the wing at over 200 miles an hour and he puts the fire out."

The final three episodes are about the African-American Red Tails; the efforts of the U.S. Air Force’s Robin Olds against MiG-21s during the Vietnam War; and the exploits of top WWII flying ace Gabby Gabreski.

"One of the key things we wanted was a strong Canadian element to the series, " Godwin says. "Beurling was a Canadian, Bader worked with Canadians, and in Wing Walker the pilot was Canadian. We wanted to show how Canadians played an absolutely crucial part in World War II, whether in the air or elsewhere."

The Canadian Warplane Heritage Museum's Lancaster is undergoing regular maintenance. It's expected to be flying again in the spring of 2013. Ian Johnson/CBC

Hamilton was the logical place for the documentary’s makers to go for parts of the series, according to Godwin, because of the museum’s vintage aircraft collection – particularly the Avro Lancaster Mk X bomber.

More than 7, 300 Lancasters were built in Britain and at Victory Aircraft in Malton, Ont., but time has been hard on them and Hamilton has one of the last two in the world still flying. The only other Lancaster still airworthy belongs to the Royal Air Force in the U.K.