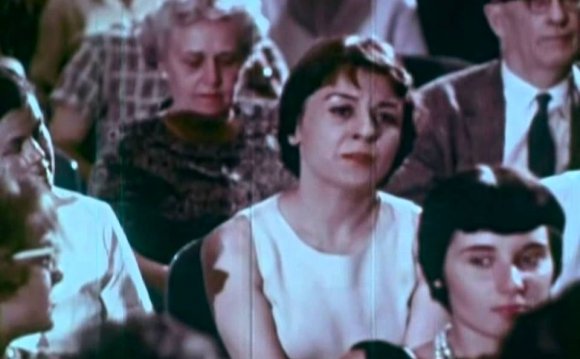 This animated picture shows an elderly English couple slowly dying of radiation poisoning following a nuclear war. In the clip, the couple — a product of an earlier age — don’t fully understand the extent of the devastation that they initially survived.

Buy the DVD at Amazon

This 1986 John Kessel play was made into a 1-hour show as part of the short-lived Masters of Science Fiction program. Sam Waterston plays the president, who has lost all memory of the day the world died—or did he? (One of the finest roles Waterston has played.) The clip looks like a promo for the program.

Sure it’s satire, and the picture of Slim Pickins riding a nuke like a bronco is ridiculous — but that’s the point. The clip is that famous scene.

This sober Japanese movie shows how the atomic attack on Hiroshima affected one fictional family. (This is the only movie on the list I haven’t seen yet, but it is highly praised and won/was nominated for several awards. I may move it up after viewing.) The clip is from the Siskel and Ebert review. (I miss Gene Siskel.)

What would happen if the president and much of the government were gone and an unstable man in the chain of succession decided that the only response to a mistaken nuclear attack was to win WWIII? The clip is the last 10 minutes, so don’t view it if you want to see the whole film.

An American bomber squadron receives mistaken orders to bomb the Soviet Union, and all “fail-safe” methods to turn the back aren’t successful. George Clooney directed and starred in a terrific live broadcast version of the original movie. The clip is from the DVD release.

Although the science is more suspect, I like the original Gregory Peck version better than the updated Armand Assante version. In both, nuclear war has devastated the northern hemisphere, and the fallout cloud is heading to a doomed Australia. An American nuclear submarine tries to find survivors. The clip is a rather silly trailer for such a grim subject.

This documentary, narrated by William Shatner, traces the development of nuclear weapons from the very first in 1945 through the first Chinese test in 1964. Most of the major test explosions are shown. The clip shows several test explosions set to the music of William Stromberg, which gives a hauntingly beautiful veneer overlaying the true horror beneath.

A Californian small-town family survives a nuclear exchange, only to experience the decay of everything that once was. Their desperate attempts to return things to normal of course fail miserably. The clip is from a movie review from 1983. It starts about 1.35 into the clip.

The Destruction of Hiroshima and Nagasaki

This HBO documentary features interviews with survivors of the attacks as well as a few Americans who were in/with the bomber crews. Would that in another 60 years, we won’t be making another documentary with survivors from another nuclear attack! The clip is the trailer.

This BBC documentary uses CGI and more to recreate the attack. Very hard to watch. Even Malcolm McDowell’s notation is chilling. The brief clip is of the black rain that fell on the devastated city, which was horribly lethal to the parched survivors.

Though not as strong as the previous films (and definitely weaker than the next two), The Day After is high on this list because of its impact. The horror portrayed is tame compared to things that make their way on TV and in the theaters today, but this film remains an important cultural milestone. When it was first on, my Dad sent me to bed just after the nuclear attack, and I never saw the rest until 2 decades later. The clip is the attack scene.

This superb Japanese animated film follows a family in 1945 Hiroshima. The tension of the buildup to the bombing on Aug. 6, 1945, is chilling and incredibly done. The attack itself is slowed-down to show gruesome details as only anime can do. Horrifyingly unforgettable. (Think Grave of the Fireflies for emotional impact.) The clip is the attack scene.

This is the bleakest and most depressing movie ever made (outside of, perhaps, Grave of the Fireflies). The BBC made this TV movie that depicts Sheffield, England, just before, during, and well after the nuclear war. There is absolutely no hope or happiness in this movie whatsoever. All is destruction, death, and terrible decline of what remains. The clip is the attack scene.