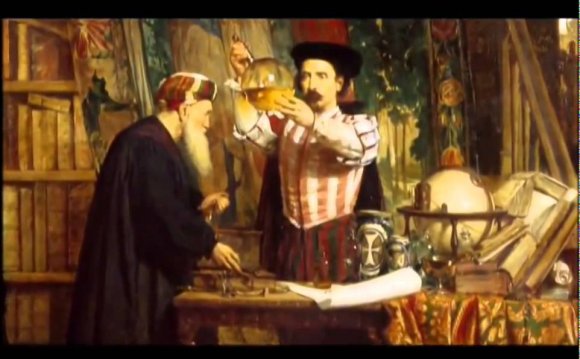 The Friday before last, with much advanced publicity, the BBC broadcast a new documentary film biography of Isaac Newton with the title The Last Magician. This phrase is part of a famous quote by John Maynard Keynes, “not the first scientist but the last magician”, describing his feeling upon reading the Newtonian alchemical manuscripts that he acquired at the auction of the Portsmouth family Newton papers in 1936. This of course together with the advanced advertising for the programme signalled that we were due for a fresh dose of “did you know that Newton was a secret alchemist?” A phenomenon that Rebekah “Becky” Higgitt

Based on quotes from Newton’s own writings and correspondence as well of those of his contemporaries the programme was in its basics factually correct. As usual for BBC historical documentaries it was well-produced and excellently filmed and thus pleasant to watch. The basic structure was the direct quotes being spoken by actors in costume and commented upon by five more or less experts. These were the historians of science Rob Iliffe head of the Newton Papers editing project and a genuine Newton expert, Patricia Fara author of an excellent book on the changing image of Newton down the centuries and Lisa Jardine expert on Renaissance history of science, as well as popular science writer James Gleick author of a competent popular Newton biography and astrophysicist turned novelist Stuart Clark.

Given all of these preconditions it should have been an excellent hours entertainment for a historian of science like myself, unfortunately it turned out to be a major disappointment for two reasons. The programme deliberately created two principle impressions that were and are fundamentally wrong.

The first of these turned up in the pre-programme publicity but also featured prominently fairly early in the documentary in what seems at first glance to be a fairly harmless statement:

This brief phrase contains two claims one implicit and one explicit. The implicit claim is how wonderful Newton was to take such a bold step when he was only 21 years old. Anyone who has spent anytime at all looking at the history of mathematics knows that mathematicians tend to be very precocious. Pascal wrote the paper that gained him entry to the top flight of seventeenth century mathematics at the age of sixteen. In the nineteenth century the teenage William Rowan Hamilton was trotted out in public like a circus pony to display his brilliance. The stories are legion and there is absolutely nothing unusual in Newton intellectual development it’s par for the course for a highly talented mathematician.