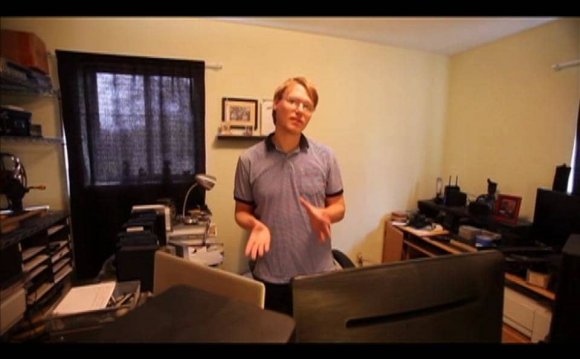 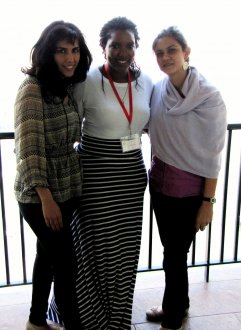 Sawt, meaning “voice” in Arabic, is an oral narrative and animation documentary project highlighting the experiences of female activists in the 2011 Egyptian Revolution and their role in the nation’s dramatic transition to democracy. Rhana Natour and Tamara Shogaolu, documentary filmmakers and researchers living in New York and Los Angeles respectively are co-directing the project. Anticipating the difficulties of convincing Egyptian women to appear on camera, they decided to use a simple recorder and collect women’s stories in their own voices as the revolution was taking place in Egypt in early 2011. For the visual dimension of their documentary, they worked with animation artists to create unique storyboards with animated characters.

Natour and Shogaolu took part in Hollings Center’s dialogue Oral History in the Middle East and Central Asia in February 2012, and were inspired to explore further the ties and tensions between oral history and documentary filmmaking. They won a small grant to go back to the field and returned to Egypt in June 2012 to conduct follow-up interviews in the wake of the presidential election. Their project also included hosting a two-day workshop that brought together oral historians, filmmakers, activists and scholars to exchange ideas on important issues in the documentary film and oral history disciplines. With a specific focus on the Middle East, a select group of filmmakers, activists and scholars shared experiences, discussed innovative uses of digital technology, best practices in oral history, creative distribution methods and the challenges of archiving new media and digital content. 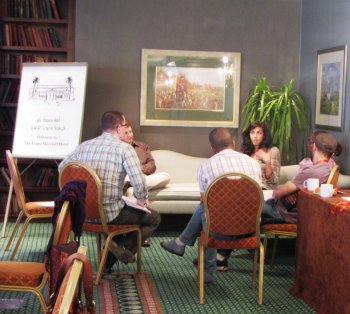 Sanem Güner talked to Natour and Shogaolu to learn more about their experience in organizing an oral history workshop and interviewing women at a historical moment in Egypt’s history.

Güner: Could you give us some impressions from the workshop? What were you able to take away on bridging the gap between documentary filmmaking and oral history?

The workshop allowed participants to see how they can truly be a resource to one another. Oral histories are not only for research purposes. Filmmakers and artists can also incorporate oral histories into their creative work. Documentaries can help oral historians to take their research beyond the archives. It was also interesting to observe the differences between the Istanbul dialogue on Oral History in the Middle East and Central Asia and our workshop. In Istanbul there was a lot of emphasis on academia in oral history and academic methodology, whereas at our workshop participants were more interested in how to use multimedia in oral history and their respective film projects.

Natour: We were very happy with the workshop because it gave filmmakers an opportunity to meet archivists and historians, and we saw that at the end of the workshop, these filmmakers had realized the importance of archives. For instance, the University on the Square project archives footage from the Revolution, which is an immense resource for documentarians. Oral historians and filmmakers are both interested in storytelling and preservation. Of course the medium and execution vary but by focusing on this shared foundation the workshop was able to draw out areas of potential collaboration and share best practices and technological tools in each field that we hope will ultimately enrich participants’ work and bridge the gap.

Güner: Why is oral history important in the Arab Spring context?

Shogaolu: In countries that are dictatorships with lots of media control, what is on the record may not reflect a complete picture, let alone an accurate account of what transpired. The voices of the people should color in and present an alternative to official history. We learn history through documents in archives, but there is no way for official, written history to incorporate people’s stories in these documents. Oral history is thus important because it gives voice to the actors of a certain historical event or period.

Natour: The events of the past year in the Arab world are incredible. Yet we must think ahead and take steps to preserve these experiences for future generations. Oral narratives will help us remember how things were seen at the time much more accurately than official records. These are important times, but in the digital age things move so fast that we need to start this process now as this information may be forgotten, taken down or irretrievable. This is a narrow window of opportunity to collect people’s narratives and oral history is an important part of this historical record.

Güner: Your project focuses on women’s experiences. What women stories were you able to collect?

Shogaolu: Unfortunately what we heard were mostly depressing stories. There is a sharp rise in harassment of women, especially in public places. We interviewed a veiled woman who participated in an anti-harassment protest, and was almost raped, got beaten up and got her clothes stripped off of her. There is equal harassment to everyone regardless of what they wear. It strikes me that stories of foreign women getting assaulted get the highlight in international press. There is no clear understanding that Egyptian women have to deal with this every day.

Natour: The rule of law has broken down since the revolution and this makes things more difficult for women dis-proportionally. From what many people told us in the interviews, there is harassment in or around Tahrir Square and the attacks follow an eerily similar pattern, regardless of the women’s profile. The woman may be very conservatively dressed, or in more Western style, may be a local or foreigner. It always happens in the same way – a mob of men crowds around the woman, cuts contact with the people around her in a coordinated way and attacks and often brings other women into this circle.

One hour documentary: The toughest shoot in filmmaking history