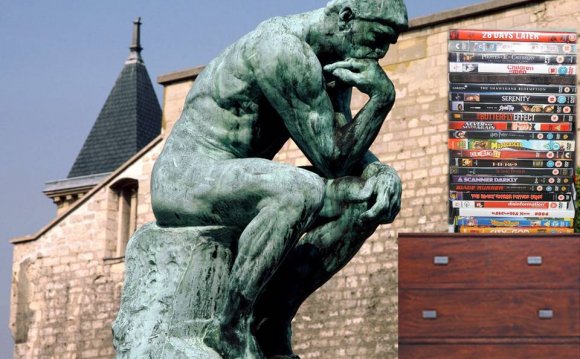 from Thank You For Smoking

Movies featuring a philosopher:
Zizek!
Examined Life
Derrida
The Ister
The Pervert’s Guide To Cinema
Being In The World (2010)*

Famous thought experiments or discussion of a famous philosophical problem:
Rashomon – General intro to Subjectivity/Objectivity
Groundhog Day – Modern interpretation of The Myth of Sisyphus
Being There – Socially constructed reality; what I like to call The Problem of Communication
Being John Malkovich – The Inescapable Subjectivity of the Human Mind
I ♥ Huckabees – Loose Adaptation of the History of Philosophy in Narrative Form
A.I. – Any movie that has robots that think like humans will do
Eternal Sunshine – Materialism; Metaphysics of Memories
Minority Report – Freewill/Determinism
The Matrix – Most people will say this is all based on Plato’s cave. I think Cartesian Dualism is a closer influence. The main reason for this is that one is not in the same body when in the Matrix as without. The distinction between consciousness and body was brought up famously by Descartes.
The Truman Show – This is the true home of Plato’s Cave in modern movies. Although Truman never leaves the cave, a reality which he has only experienced as a shadow is implied and shown briefly.
Thank You for Smoking – Pre-Socratic/Postmodern Rhetoric
A Clockwork Orange – Person Identity; Political Theory; Justice; blah blah blah
Lake Of Fire – Ethical considerations of abortion
Inception – This film is brand new and is at the center of fierce discussion, which is the life blood of philosophical inquiry. As for the topics it raises itself: Although it can be argued that Nietzsche preceded Freud in discovery of the unconscious, the Freudian version is forefront in Inception. Freud’s psychoanalytic method had much to do with dreams and how they affect and describe us. Also, Cartesian skepticism, or The Problem of The External World, comes to surface.
Pi – The Ontology of Numbers
Waking Life – This feels more obligatory than anything else on here. If I include Alexander and Bill and Ted, I guess this one deserves to be here as well. But with all its pretension it actually offers a somewhat realistic cross section of the philosophical academic experience. Some thinkers sound like they are brilliantly laying out real solutions to real problems, some seem like they may be saying something insightful but are just not articulate enough, some are just too esoteric to tell and some are just simply on drugs.
Stranger Than Fiction – The Authentic Individual
Ikiru – Being-unto-death
The Seventh Seal – The Angst Of The Absurd
The Gods Must Be Crazy – I can’t even count how many times this movie was referenced in discussions about “Being and Time” by Martin Heidegger. The coke bottle is a piece of equipment that suddenly lands in a culture without the referential totality of coke bottles. As such, for the bushmen, the coke bottle ceases to be equipment though it retains readiness-to-hand as its mode of being.

The Philosophy Of Beauty|Ubuntu Films