War of the Worlds documentary 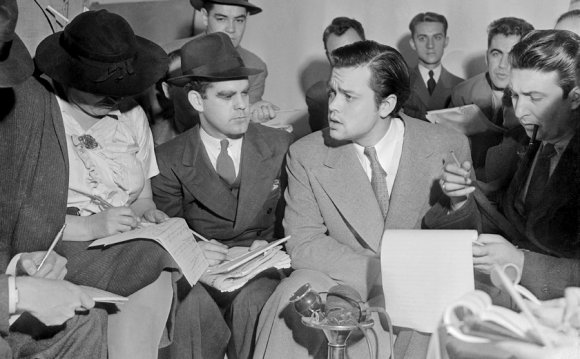 It took place the night before Halloween, 1938, long known as Mischief Night. Like many other ordinary evenings, millions of Americans turned on their radios for some evening entertainment. Those tuned into CBS Radio were treated to an unusual dramatization of H.G. Wells' classic The War of the Worlds, performed by 23-year-old Orson Welles and his Mercury Theater on the Air. Although most listeners understood that the program was a radio drama, the next day's headlines reported that thousands of others - perhaps a million or more - plunged into panic, convinced that America was under a deadly Martian attack.

By the late 1930s, Americans were tense with worry and fear; the Great Depression refused to let up, and the threat of war in Europe loomed larger every day. Then, shortly after 8 p.m. on the eve of Halloween in 1938, the voice of a panicked announcer broke into the dance music with a news bulletin reporting that strange explosions were taking place on the planet Mars, followed minutes later by a report that Martians had landed in the tiny town of Grovers Mill, New Jersey.

Almost instantly, frantic listeners responded to the shocking news. Chicago newspapers and radio stations were flooded with calls; in St. Louis, people gathered outside to discuss what to do about the "invaders"; in San Francisco, many feared that New Jersey had been laid to waste and that the Martians were heading west. Callers pleaded with the power company in Providence to shut off the lights so that the invaders would not be able to see the city. Similar reports of panicked reactions came from Baltimore, Atlanta, Indianapolis, Memphis, Minneapolis, and Salt Lake City. At the epicenter of the event, New Jersey national guardsmen flooded armories with calls asking where to report. And in cities and towns across the country, people stopped a moment to pray - then grabbed their loved ones and fled into the night.

Beyond the War of the Worlds - UFO Aliens Documentary

H.G. Wells and the War of the Worlds: A Documentary (Trailer)