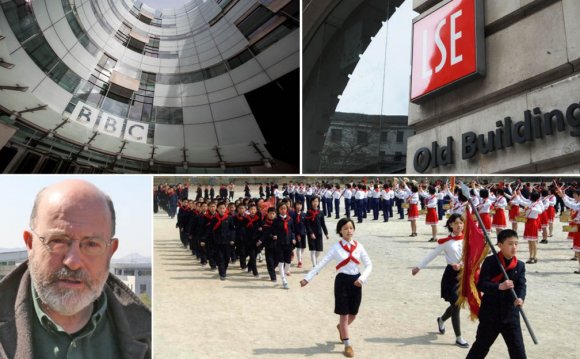 The resulting footage was broadcast in the April 2013 programme Panorama: North Korea Undercover.

The LSE and a father of one student made a series of complaints to the BBC, and the programme was investigated by the Trust’s editorial standards committee.

The BBC has now written letters of apology to both after the Trust ruled the programme breached editorial guidelines.

In their report, the Trust said: “There was a real public interest in making this programme in North Korea but, in the Trust’s view, the BBC failed to ensure that all the young adults Panorama travelled with were sufficient aware of any potential risks to enable them to give informed consent.

“This was a serious failing, and the BBC is right to apologise to the complainants.”

The report found that Sweeney contacted the Panorama editor in January 2013 to talk about a documentary on North Korea. A week later, Newson approached the editor to say she was planning a student trip to the country.

After students signed up for the trip, Newsom and a member of the Panorama team held a meeting in a London pub where they mentioned that a journalist would be joining the party.

The BBC claims the students were also briefed about the risks of detention, deportation and arrest, but several of them disputed this.

The Trust report criticised Panorama for holding an informal meeting in a noisy pub instead of hosting “an informed discussion about the risks of the trip and whether they were worth taking”.

It also said Panorama lacked an exit strategy for the students and said the students were unaware that the BBC team had a plan to separate from the group if detected.

That would have entailed Newson deserting her charges and “the students would have been left, in effect, as a group of young adults from a variety of different countries, all personally responsible for trying to extricate themselves from possible detention”.

The BBC said it did not want to tell the students too much because it wanted to afford them “plausible deniability” in the event that they were questioned by the authorities.

In its ruling, the Trust also concluded it was “inappropriate” for Panorama to use the LSE’s address for visa applications without the university's consent and had risked harm to the LSE's reputation. Sweeney used the address of the history department in his application, while the cameraman gave an address for LSE halls of residence.

Responding to the ruling, the BBC said it accepted that handling of the project “fell short in a number of areas” but maintained there was strong public interest in commissioning and broadcasting the programme.

The father who complained to the BBC said after the ruling: "I am pleased that the Trust has now found what the LSE, my daughter and I already knew: that the BBC acted inappropriately in a number of respects relating to this trip.

"When news of BBC involvement in the North Korea trip emerged, I was very concerned that the BBC had so obviously risked the lives of these students in an ill-conceived scheme of questionable journalistic value.

"My daughter was likewise deeply troubled by the impact this secretly filmed programme may have had on the North Korean guides and their families. Each were decent, ordinary people trying to conduct their lives under Kim Jong-Un's repressive regime.

"It is now clear the BBC failed the students, who were unwitting human fodder used to fulfil John Sweeney and his wife's personal ambition to film inside North Korea. We are all extremely fortunate that everyone returned safely."